Donald J. Trump does not speak for me.

Hi! I'm Marie Brown (obviously, given that big heading above), and I'm a writer. I'm also a 3D artist, a bellydancer, and sometimes even a musician. And contrary to the general trend of humanity, I don't like to talk about myself much. But I'll try, because people have been kind enough to buy my books and come visit my website. Might as well give 'em (you!) something to read while here.
Okay. I live in Colorado. I have lived all over the United States, though, and really loved Arizona. I have two cats, who frequently make it very difficult to use my computer. I used to design websites for fun, but recently, I've had a few too many comments about how my sites look retro, from the 90s, outdated... you get the picture. So this time, in an effort to ensure a more modern look and a nice responsive design that will work across many devices, I'm cheating. W3Schools, where I go to learn whatever I need for the web, has some nice, handy templates. So I'm modifying and adapting those, in an effort to have a modern website sometime before the next century. It's making me rather cranky, though, because I happen to like the crazy, chaotic, retro look.
There. I said something about myself, and it didn't cause physical pain. If you want to know more, look me up on Facebook or deviantArt. There's links.
Also, I'm working on a way for people to buy books right off the website. Don't hold your breath, though, because it may not happen. Until it does, the Storybook should be able to get you to places where you can safely and securely buy my books. Smashwords and Amazon have been doing the online retailing thing a hell of a lot longer than I have.
And simply because I can do such things, I am going to work on special editions of some of my stories. I think, maybe, possibly, I have the skills needed to finally complete a project I've had in mind ever since I first went online a zillion years ago. So if you like experimental stuff, well, it just might happen.

I have a shit-ton of works in progress. Writing, art, and website plans, the ideas breed faster than the time to work on them. So I've decided to focus on just a few of them. 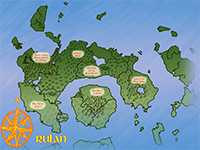 Rulan is the name of a world that randomly generated itself from my first attempt to make a map in Photoshop. It has many islands, many cultures, and many stories waiting to be told.

After the Rain is in the process of receiving an intense editing process. Initially, I thought the rough draft sucked and was hopeless, but I tossed it up on WriteOn (obviously before it died) because I love the characters and wanted to salvage their story. Now, after some detailed feedback, I know it's just sloppy, not hopeless.
Update: Um, yeah. Still not out. There's one single scene I don't want to write. But it'll get there!

There's more information about this insane project of mine on this website. I just thought I'd mention it here because I've been trying to make it work for a significant portion of my life.

And, in my copious free time, I'm doing 3D artwork. I tried to learn modeling, but all it did was make me swear, so I went back to using purchased assets to make 3D scenes. Much more fun.Take a peek at my galleries over at deviantArt and explore my weird worlds!

Look out, world. I'm all over the place.

I participate in National Novel Writing month, and Camp NaNoWriMo, almost every year. This visual chaos represents thousands upon thousands of words written in the quest to get yet another little web badge.
And... as of 2020, the NaNo website has gotten seriously annoying. I participated in the April Camp, but it drove me nuts to the point where I may not even continue using the website. I Camped with my friends from the End of the Rainbow Cabin in a Facebook group instead of dealing with the annoying as hell interface of the new website. So... no more little "participant" or "winner" doodads.
NaNoWriMo